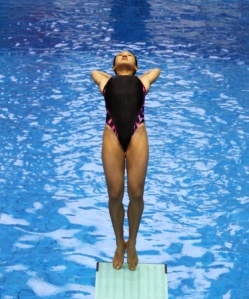 At the outset, let me say that diving is not one of my things. In fact the few times in my life that I ventured off a Springboard my efforts could best be described as an uncontrolled fall rather than a dive.

Despite my own pathetic efforts, like most people I can discern between a dive and a DIVE! To impress us and the judges, competitive divers tumble, spin and gyrate as they plunge from the board to the water below. Each of these maneuvers quires a great deal of effort, skill and courage. To reward a diver’s daring, FINA, the world governing body for Swimming, Diving and Water Polo rates various dive routines on the basis of their degree of difficulty. And this is factored into the scoring system – the greater the degree of difficulty the more potential points to be earned. Currently the maneuver with the greatest degree of difficulty for a 3m Springboard dive is a “Reverse 4.5 in Pike Position”.

The thing about diving is that it is all about successfully executing the transition between leaving the board and when the diver’s body is fully enveloped by the water below. It’s what happens during those split seconds that determines winning and losing. A diver can play it safe with a relatively easy dive or attempt to nail a dive with a high degree of difficulty. In competitive diving a conservative diver rarely wins a top competition.

Transition execution is also now seen as critical for not for profits.

When a CEO leaves a not for profit, how well an organisation uses the transition between the incumbent announcing they are leaving and a replacement being on-boarded is vital in determining whether the organisation will rise to another level, flat-line or decline in the coming years.

Our Janus Leadership Transition Program is the “dive routine” during this transition. The Program is future focused and helps an organisation to correct any vulnerabilities, determine where it is heading and find the right person to guide the organisation towards the new vision. Like a Reverse 4.5 in Pike Position it requires skill, effort and courage to execute well but will be given 9’s and 10’s by stakeholders when an organisation nails it.

Chris is the founder of Cause & Effective. Our cause is to help cause-based organisations more effectively deliver on their cause