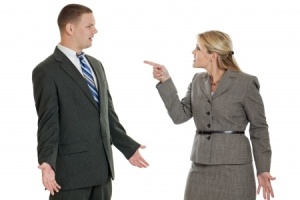 I once worked in an executive assessment centre with a very accomplished manager who was a co- assessor with me. One night we were chatting after dinner and he mentioned a mutual acquaintance.

“Of course,” he said: “Alan is the kind of guy who should be locked in a small room with no windows and only one door. Every morning a piece of paper with a problem on it should be posted under the door and every night he should be asked to post it back under the door. This should go on for a whole week and at the end of it Alan will have produced great answers.”

Maybe misleaders would like to do this with some of their subordinates but mostly they have to work with them in some sort of a team or at least a meeting setting to sort out problems and issues. Here is a partial list of tried and true behaviours misleaders adopt to ensure that they get alienated people and sub-optimized results:

I am sure you have come across this Misleader before. These people are not only painful to deal with but they can have damaging outcomes as a colleague once related:

¨The CEO had all the answers.  He paid lip service to the ideas of his subordinates. However, he was dependent on them to implement his views.  Accordingly, they paid scant respect to both him and his ideas.  The ideas never came to fruition.  No matter how loud he   ranted and raved, nothing they implemented worked – and more to the point,  the staff let it be known whose ideas they were implementing and why they  were not working. Key members of his organisation found other jobs where they  were actually valued for their ideas, skills and knowledge.  The organisation went pear-shaped rapidly”.

The lesson? Listen to your subordinates – they have valid and  valuable ideas, skills and knowledge – use them to your advantage, and allow  them to benefit as well.  Your organisation  will grow, and your staff will support and go the extra mile.

Author: This post is by Ian Sampson (B.Comm., LLB., FAICD, FAIM). Ian is a Cause and Effective Associate (www.causeandeffective.info). He is a Strategic Advisor to Boards, an Executive Coach and a Facilitator of our Powerful Leadership in Action Program. He can be contacted here.