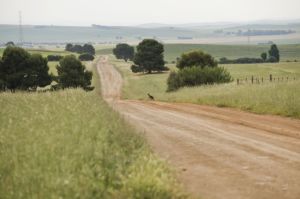 You are probably familiar with The Road to Abilene, a business parable addressing the dangers of groupthink. I have changed Abilene to “Nowhere”, a mythical outback Australian town, and the story goes something like this:

There is a group sitting around a veranda on a very hot summer’s day and one says: hey, we could always take a drive into Nowhere and get something to eat. Another says: OK, that’s seems a good idea. And they all decide to jump in the car and drive to Nowhere. It’s a long, dusty trip. No air-conditioning, the food was so so, they’re all miserable. On the way equally miserable trip home someone finally acknowledges what a crap decision it was: why did we even go when we could have just enjoyed a day lying around sipping cold drinks? After a round-robin of blame-placing they come to the original guy who suggested it and decide to blame him. Embarrassed he says: I thought you were all bored so I just threw the idea out there… you were the ones who decided to come along for the ride.

This is a true family story written by management expert Jerry B. Harvey. He started to wonder why work groups, management teams or boards embark on excursions that most members don’t want to take.

I am particularly interested in this from a cause-based board perspective as I have witnessed so many road trips to “Nowhere”. Typically after this unpleasant excursion someone eventually pipes up saying they didn’t want to go down that track in the first place (if you listen hard enough you can hear the stable door closing about …now!)

How does this happen?
Harvey is of the view that it occurs not because we have difficulty managing conflict or disagreement in a group but because we lack the skills to manage agreement. Too often silence from a Board member is interpreted as agreement. But often Board members fail to accurately communicate their thoughts to others simply because they “don’t wish to rock the boat” or wish to appear stupid.

A good start is to understand the difference between genuine agreement and false agreement. Both result in an eventual decision and a course of action but is the decision making process that is the differentiator:

False agreement is usually arrived at after meetings where the chair or one or two people of power dominate. People feel uncomfortable expressing their opinions. Discussion is not respectful. Body language is negative. Information is not comprehensive. Decisions are fast tracked. Board members are not comfortable with disagreement. The final sign-off process is vague.

Genuine agreement is achieved when the decision making process involves asking questions and listening to answers. Different perspectives are encouraged and accepted. Testing for agreement is conducted early and often.  Disagreement is managed when it occurs. The Board is assist to make a decision that people will accept and carry out. There are guidelines for discussion that allows everyone to gate keep when others are being ignored or disengaged. And when all members accept their responsibilities to contribute.

Sure it also takes some courage for a Chairman to expose themselves by checking and probing individual positions and gate keeping. Patience is also required as it may seem like the process is taking longer than it needs to, but consider the costs of false agreement.

Just because you’re on the road to Nowhere doesn’t mean you can’t pull over, rest by a creek and turn back.

Have you been to Nowhere?  Tell us about it.

About the author – Chris Gandy is a Director of Cause and Effective , providers of Coaching, Consulting, Facilitation and Executive Transition Services to cause-based organisations.